This piece started as a much larger work. The lower section was positioned inside a box with a mirror in the back and small plastic animals wandering about on either side. After about two years of looking at what I considered a failed piece, I tore of the box and the mirror and created a way of wall mounting. I added the brass plate and clutch assembly ring at the top and, of course, the Barbie arms.

Since it seemed to be shrouded in bad luck, I gave it away as a raffle item at ArtFest in 2012. Gordon Wilson and Harold Balaz also donated pieces that year so I was in good company. Anyway, the upshot of it is that my life turned around. I had an invitational show at MOMA, my album was number one for three weeks on Billboard, I won on Dancing with the Stars and picked the winning Washington State Lottery ticket for over three million dollars. [Just checking to see if anyone actually reads this stuff...]

Private Collection of Some Lucky Winner 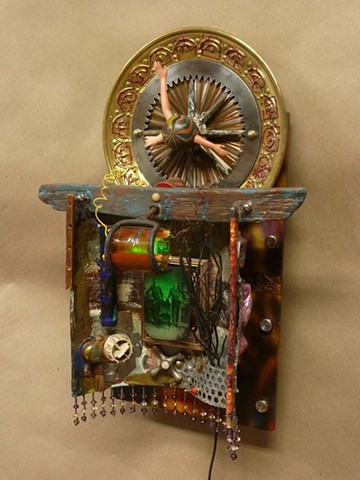