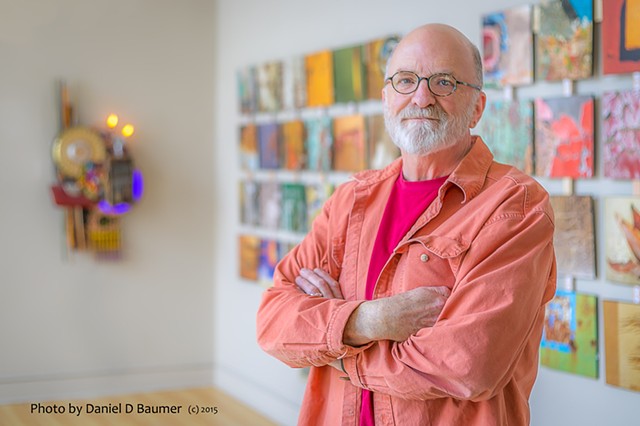 It's fun to make stuff that's interesting to look at. Finding new ways of seeing the commonplace seems like a good idea to me. Many of us daydream and wander through our imaginations. I bring back souvenirs.

Having been told in the 7th grade I had no artistic talent, I still went ahead and took a few college courses in art and music but never tried to graduate. In the 70s, I designed and produced silkscreen-printed products in my shop, House of Laurelling at 2nd City in Spokane. Most of my career was with Inland Audio Visual, which I owned and managed for 28 years. I wrote scripts, composed music, designed sound and art-directed to produce multi-projector slide shows. After a 30 year hiatus I started to make art again in 2003. Becoming a full-time artist after retiring from Inland AV in 2011, I've shown at art shows and galleries around Spokane and Coeur d'Alene.

My life-long love of music and music technology has recently been rekindled. In the MUSIC: Soundcloud section are posted 14 pieces that were created between 1980 and 1995. Recently I've been pursuing my interest in creating experimental electroacoustic music. I use a Mac-based system for studio creations and a system based around a MIDI sequencer, small desktop synths, keyboard, wind and foot controllers for live performance. And real saxophones.