My friend Sherry live in the old Frequency Changing Station overlooking Underhill Park in Spokane. Before she renovated the "powerhouse" in the 1970s, there was a neighbor in the area named Mr. Nelson, who built a strange contraption using solenoids, stepping relays, buzzers, lights, wheels, and a lot of handmade parts and pieces, all created to fascinate and amuse visitors. Sherry was quite taken with it. So when Mr. Nelson moved, he gave the "box" to her. Fast forward 35 years...

Sherry unearthed it and found her memory of it didn't quite match the reality. Plus, it only partly worked and that part didn't work very well. She asked me if I could fix it. I said it was possible but that it would not run much longer even with a lot more work. So she commissioned me to update it. Well, really, to re-imagine it. So I set about building a piece of art that I hoped would match her imagination and memories better than the real thing. Four months later, it debuted in the deep, dark basement (well, actually the wine cellar) of the powerhouse to a small audience of guests, experiencing it one at a time.

The design is based on a 1980s arcade video game but it has no video. The exterior was fabricated in a Buck Rogers style and was designed to fit around a drain pipe that runs right through the cellar. There are built in speakers that play the sound track which includes both an "attract" mode and a "show" mode that synchronizes perfectly with the "action." It is controlled by an eight-channel MIDI sequencer (normally used with music synthesizers) and relay box. The show is viewed through the goggles at the top of the machine and includes a gravity-defying mirror image a backlit circuit board landscape, hanging objects blown around by fans, flashing lights both inside and outside, a stepping motor-driven, slowly advancing disk of images of naughty ladies leading to the grand finale. It squirts water up your nose.

Collection of Sherry and Frank Knott 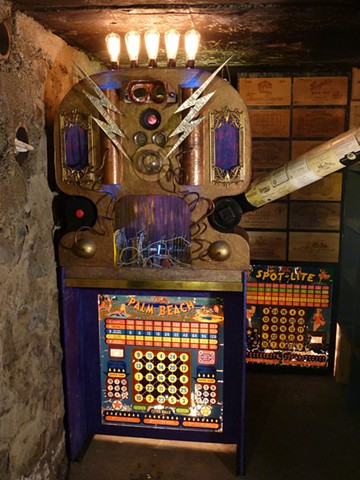